Many thanks to those who contributed links to the Carnival this time.
We have 25 contributions from 12 contributors.

Today's 14 Contributors - please see the items below for exact URLS of their posts.

This month's featured blog is Christie Reader. This blog has been going for just over a year and in that time the creators have reviewed nearly 50 titles.

Here is their "mission statement".
It's an unofficial project to read, review and comment on all of Agatha Christie's books. At about one a week. The way it works is that there are two of us. Kate's read them all. She'll suggest a book to James and he'll then read it, and write about it, and Kate will point out where he went wrong. And then suggest another book. Not necessarily in chronological order, but hopping around by theme.

They have implemented a very useful list of labels to help you locate titles related to particular topics like travel, rhymes, and poison, as well as the usual Miss Marple, Hercule Poirot etc. You can also look at titles written in 1920s, 1930s etc.
The latest post is a review of A CARIBBEAN MYSTERY.

unfinishedperson presents And Then There Were None by Agatha Christie posted at An unfinished person (in this unfinished universe), saying, "The way this one is crafted makes it a classic for me, even if it does stretch credibility, as one of my friends argues, perhaps even to a ridiculous extent. How Christie organizes it, though, puts it "over the top" for me."

KerrieS presents The Murder at the Vicarage - wonderful cover posted at MYSTERIES in PARADISE, saying, "The Agatha Christie covers painted by Tom Adams constitute probably the most famous examples of paperback art ever produced."

From KathrynC: Agatha’s Christie’s Unexpected Guest arrives at Gawsworth Hall – Just The Perfect Time for An Afternoon Picnic Tea. posted at Tea With Mary Kate - Inspiration for Tea and Living"On a foggy night, Michael Starkwedder enters the home of the Warwicks through a window in the study. There lies the dead body of Richard Warwick, and Warwick’s wife, Laura, holding a gun that supposedly killed him…" 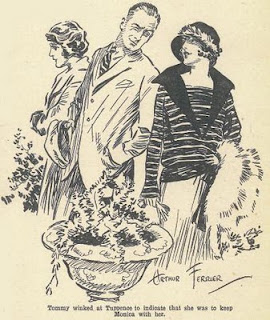 quirkyreader presents quirkyreader - I finished more Christie's posted at quirkyreader, saying, "I have included some vintage covers in this post".

Caviglia presents Dame Agatha, My Cup Runneth Over! posted at Caviglia's Cabinet of Curiosities. "I love Agatha Christie. I might love Agatha Christie more than any other author. I've read every novel, every short story and her autobiography (which is excellent). I re-read her books more frequently than I care to admit - I read them whenever I am sick or sad or distracted or have insomnia. I would happily defend her oeuvre with my dying breath. Look, are her books great literature? Of course not."

BooksPlease presents Death on the Nile by Agatha Christie: Book Review  at BooksPlease, saying, "The crime that wasn't safe - that hung on a razor's edge, needing swift execution and audacity."

Elizabeth presents Dead Man's Folly posted at Miss Lemon's Mysteries, saying, "You'll forgive her for mentioning it, but even Miss Lemon can boast of a walk-on rôle in this real-life game of Cluedo."

Sarah M. presents Sad Cypress by Agatha Christie posted at A library is a hospital for the mind..., saying, "A well-written mystery with plenty of red herrings and clues cleverly woven throughout... The setting is quiet country village with a beautiful, but haunting estate. The characters are different, but not unusual. The murder weapon is poison, Agatha Christie's personal "favorite" if you could call it that. Must read for Agatha Christie fans or avid mystery readers."

Ryan Groff reviews Peril At End House by Agatha Christie posted at Wordsmithonia. "This is probably one of the more interesting endings to a mystery book that I've read in a while,"

George Kelley presents “THE BLUE GERANIUM” By Agatha Christie posted at George Kelley. "PBS must be running out of Miss Marple novels to film so they’ve turned to Miss Marple short stories."

Nancy Oakes reviews A Caribbean Mystery at 2010: The Year in Books.
She writes "Miss Marple is the perfect detective. When people look at her they see "all knitting wool and tittle-tattle," and she becomes more or less invisible that way, easily dismissed by most of the players. But one man sees right through her."

KerrieS presents Review: THE EDGE, Agatha Christie, short story at MYSTERIES in PARADISE, saying, "The title of this short story has a double meaning, which increases its cleverness."

Words in Pictures: Agatha Christie posted at The New Statesman, saying, "In this animated audio clip, recorded whilst the author was writing her autobiography in the mid 1960's, Christie discusses both Poirot and her long-serialised female protagonist, Miss Marple, first introduced in The Tuesday Night Club (1927). Christie explains why Poirot and Marple could never have appeared in the same story"

How Agatha's husband drove her to murder: DUCHESS OF DEATH by Richard Hack | Mail Online posted at Books | Mail Online, saying, "A Review of DUCHESS OF DEATH by Richard Hack. When you read the content of the review, you can't help wondereing what there is left to tell. The review ends outrageously "I am left wondering: was Agatha Christie a lesbian? Was a fatal lack of sexual chemistry what made Archie so frustrated and why he had to bolt? It would explain her fondness for sporting hairnets.""

David Suchet as Himself posted at Saturdays Child, saying, "A really nice blog post about David Suchet, with links to somereally good videos. Inspired by his new appearanace in the TV version of MURDER ON THE ORIENT EXPRESS. Includes his appearance on "Who Do you think you are?""

Two adaptations of Agatha Christie's Death on the Nile posted at Pop Classics, saying, "The author of this blog says "Ancient Egypt, essentially, is little more than a backdrop - but it's a very impressive backdrop indeed.""

Agatha Christie: Why they wanted to take 20 years off Poirot (and give him a girlfriend) | Mail Online posted at Daily Mail Online, saying, "Lessons in writing from beyond the grave, with an introduction from her grandson."

Agatha Christie: The curious case of the cosy queen posted at The Independent. How has a shy, upper-middle class lady, born in Torquay in 1890, become (almost certainly) the most widely read novelist in the world today?

BooksPlease presents Agatha Christie Reading Challenge: My Progress posted at BooksPlease, saying, "My progress is slow but enjoyable. I've included my latest find in this post."

Submit your blog article to the next edition (August 23) of the agatha christie monthly carnival using our carnival submission form.